The difference a decade can make: DMZ turns 10

2020 marks a huge milestone for the DMZ. It’s a big anniversary – we’ve officially been around for a decade. We’ve transformed from a small student coworking space to a world-leading incubator-accelerator, and to celebrate this birthday we’re taking a trip down memory lane to reflect on the accomplishments, challenges and victories the DMZ has seen since our inception. Most importantly, we want to highlight the people who have pivotal roles in shaping what the DMZ is today.

We’re giving away a Nespresso machine + more to celebrate 10 years!

Check out the DMZ Instagram to participate in our trivia and giveaways over the next two weeks. Starting on Wednesday, September 16, we’ll be giving away a brand new Nespresso Vertuo Coffee & Espresso Machine, exclusive DMZ swag and a copy of the #1 Bestselling book Good to Great by Jim Collins. Since you’re already reading this blog, you’ve got a head start – you may just find some trivia questions here! Follow us now to ensure you don’t miss a post. 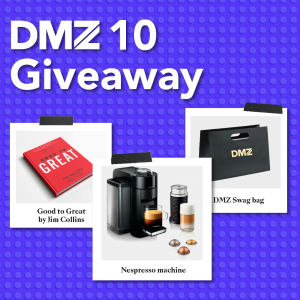 The DMZ is born.

A student founder from Soapbox pitched an idea to Sheldon Levy, Toronto Metropolitan University’s then-President. The student needed support in developing an idea for a new startup company and couldn’t find the help they needed on campus. Sheldon Levy saw the potential to create an innovative space for students to work on new business ideas, and together with co-founders Valerie Fox and Dr. Hossein Rahnama, the Digital Media Zone was born!

Within one year of opening, the DMZ had already garnered significant interest within the entrepreneur ecosystem. In 2011, the DMZ’s first Executive Director and Co-Founder, Valerie Fox, made a decision that would transform the Digital Media Zone: opening our doors to founders outside of the Ryerson community. As the number of founders joining the DMZ grew, the physical space grew with it and expanded two extra floors to accommodate incoming companies.

DMZ Co-Founder, Dr. Hossein Rahnama was the first to commercialize his research at the DMZ and founded Flybits – a startup that went on to become one of Canada’s top AI companies.

Royalty arrives at the DMZ.

It’s true! In 2012, His Royal Highness Prince Charles paid a visit to the DMZ while on a Canadian tour. The Prince made his way through the DMZ’s offices at Yonge-Dundas square and student entrepreneurs were given the opportunity to showcase their companies, drawing the royal member’s attention to the talent and innovation being incubated at the DMZ.

In 2012, Carrie-Ann Bissonnette, Manager, helped build processes and rigger that shaped the foundation of the DMZ in its early days.

In 2013, the DMZ received yet another high-profile visit. This time, it was Justin Trudeau that stopped by to get a tour of the newly-expanded, five-floor DMZ incubator during his federal Liberal leader election campaign that year.

Now known as DMZ Sandbox, the former Launch Zone opened its doors in Ryerson’s brand new Student Learning Centre as an on-campus space to help students looking to explore the world of entrepreneurship. More than six years later, DMZ Sandbox continues to help the next generation of aspiring entrepreneurs turn their ideas into real businesses.

2015 marked a turning point for the Digital Media Zone. Over five years, the technology being incubated at the DMZ shifted and the majority of startups were no longer considered to be within the digital media field. The Digital Media Zone announced an official rebrand to “DMZ”, signalling it had become sector-agnostic.

In July 2015, the DMZ saw another big change – Abdullah Snobar took over the role of Executive Director.  From the start, Abdullah invested in rebuilding the DMZ so it offered more functional workspaces, better communal areas to host events and investor meetings, and home-like amenities to build a comfortable environment for founders spending long hours on their startups. Under Abdullah’s leadership, the DMZ began putting dedicated resources into expanding its program team. DMZ’s offerings expanded to include more hands-on coaching, vibrant community events, support with customer acquisition and giving startups better access to capital. Revamping the program structure and creating a “founders first” environment ultimately led the DMZ to earn the title of the top incubator in North America by UBI Global!

As the DMZ continued to evolve its growth strategy, its next big move involved launching the first Advisory Council in 2016. Formed to help build the strongest startup community in the world, the Council members would go on to promote the DMZ in the broader business community and advise the DMZ on matters such as strategic direction, international growth, fundraising, industry trends and more. To this day, our Advisory Council nurtures the DMZ’s connection with the business community.

That year, DMZ also gave Canadian tech startups a new place to call home south of the border and opened a new office space in the heart of New York City’s financial district, making the DMZ the first Canadian university incubator to open an office in the U.S.

In 2018, UBI Global ranked The DMZ as the number one university-based incubator in the world. UBI Global is a leader in performance analysis of business incubators around the world. The Stockholm-based research organization looks at over 20 key performance indicators to determine rankings.

That’s not all for 2018! DMZ was given yet another prestigious title by Waterstone Human Capital and was named as one of Canada’s Most Admired Corporate Cultures, affirming the DMZ’s core values as an organization: -‘equity over everything’, ‘founders first’ and ‘be great’.

Last year marked another year with many firsts for the DMZ. In 2019, we launched two brand new programs that both took a customized, founders-first approach. The first, DMZYYZ, launched a two-week soft-landing program that gave elite international entrepreneurs a personalized ticket into the North American market, fueling business integration with other global markets. The second being the Black Innovation Fellowship – a first-of-its-kind initiative in Canada aimed at breaking down barriers Black founders face, helping them scale their companies to the next level.

Between a global health crisis and economic downtown, it’s no secret the last six months of this year have brought pain, heartbreak and struggle for many in our community. The business landscape, in many ways, has completely transformed – but as a result, we’ve found some powerful silver linings.

The DMZ community thrives off of building strong in-person connections, but moving to a virtual environment has opened new opportunities for our startups and programs. We’ve been able to connect more extensively with founders, partners, and opportunities around the world. Virtual programming has allowed us to expand our offering to international companies, and we’re now serving (and accepting applications from) startups worldwide.

That’s just a quick snapshot of what we’ve got going on – it’s been a busy year, but we won’t stop here.

DMZ’s vision is to see a world powered by ambitious entrepreneurs. In these times, we pledge to do whatever it takes to help our tech startups push past barriers to growth and transform into world-class organizations.

Thank you to everyone who’s helped the DMZ become what it is today – the late Raymond Chang, Valerie Fox, Dr. Hossein Rahnama, Sheldon Levy, and Mohamed Lachemi, current President and Vice-Chancellor of Toronto Metropolitan University, just to name a few. An immense thank you to all of our incredible startup founders and their teams, all of our coaches, advisors, partners, and staff – cheers to the next decade of building great Canadian tech companies.

We can’t wait to see what the next 10 years hold.

Are you a startup founder interested in learning more about DMZ’s programs? Reach out at dmz@torontomu.ca!

Growth 39 articles in this collection See all 39 articles
Growth DMZ’s Year in review: Coffee, capital and community The stats are in! Let’s take a look at our feats this past year. After an eventful 2022, the DMZ is taking a step back to appreciate all we’ve ac...